The Dow Jones today slipped, falling 3 points despite news the U.S. economy grew at a faster pace than previously reported. This was the day after the Dow hit its 29th record close of the year. The S&P 500 reported 73 new 52-week stock highs and no new lows on the day as the market rally continues. The S&P 500 Volatility Index (VIX), the market's fear gauge, slipped 1.7% on the day. 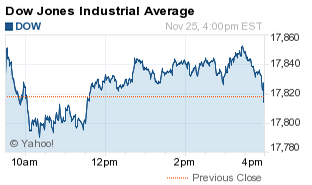 What Moved the Markets Today: The U.S. economy grew at a pace of 3.9% in the third quarter, a figure that was stronger than previously reported by the U.S. Department of Commerce. The first revision to the report was a solid increase from the original estimate of 3.5%. The new figure outpaced the expected consensus downward revision of 3.3%. This is good news for the U.S. economy, which continues to break out of its long-term slump, and could serve as a catalyst for the U.S. Federal Reserve to begin plotting its action on interest rates. The Dow's continued surge prompted FOX Business' Stuart Varney to ask our Shah Gilani when the Index will hit 18,000. To hear his answer, watch his interview right here.

Now check out the day's most important market notes:

Now our experts share some of the most important investment moves to make based on today's market trading - for Money Morning Members only:

Garrett Baldwin is a globally recognized research economist, financial writer, and consultant with degrees from Northwestern, Johns Hopkins, Purdue, and Indiana University. He is a seasoned financial and political risk analyst, with a focus on stocks, hedge funds, private equity, blockchain, and housing policy. He has conducted risk assessment projects for clients in 27 countries, and consulted on policy and financial operations for some of the nation's largest financial institutions, including a $1.5 trillion credit fund, a $43 billion credit and auto loan giant, as well as two of the largest Wall Street banks by assets under management.

Garrett joined Money Map Press as an economist and researcher in 2011, specializing in alternative strategies with an emphasis on fundamental and technical analysis.