But investors who pounced on the central bank announcement last month have already booked big gains. And for those who didn't, there are still plenty of profit plays to make on Japan.

Here's how this central bank move is creating one of today's best wealth-building opportunities...

BOJ's Stimulus: More of the Same 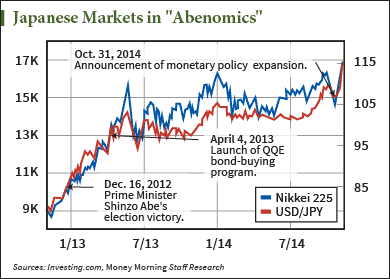 The recent announcement from the BOJ is more an expansion of policy than the start of a new one. It started in 2012 when Japanese Prime Minister Shinzo Abe won an election with a plan to rein in the deflation that has ravaged Japan for two decades.

His plan was dubbed "Abenomics." It's comprised of three "arrows," with the first two aimed at pumping money into the economy through aggressive fiscal and monetary policy. The third arrow deals with structural reform.

The recent announcement is just more of this "qualitative and quantitative easing" that began in April 2013.

Despite assurances that the original QQE plan would suffice, it has always been open-ended and subject to increases. In fact, BOJ Governor Haruhiko Kuroda has pledged to do "whatever it takes" to spark inflation. This is an oft-cited refrain by central bankers who are poised to print as much money as they see fit.

And Japan was ready to do something to reignite a rally in the Japanese markets. The Nikkei 225 Index had struggled after falling as much as 10% in October.

But it's a tough sell to say Abenomics arrested the deflation crisis, and this new twist is unlikely to make it more effective...

Abenomics saw a "honeymoon" period when it first started.

But most of the market's movements did not come from actual inflation or substantive growth. Instead, it stemmed from Western hedge funds.

Japan setting an inflation target and pursuing a QE strategy was enough to excite foreign borrowers to create the appearance of recovery. In 2013, foreign investors bought 16.7 trillion yen in Japanese equities.

Chief economist of Nomura Research Institute, Richard Koo, wrote about this in his book, The Escape from Balance Sheet Recession and the QE Trap: A Hazardous Road for the World Economy.

"New York hedge funds and other foreign investors shifted huge quantities of money to Japan upon the announcement of Abenomics, selling the yen and buying Japanese equities," he wrote. "Most domestic investors - and particularly the institutional investors who know the Japanese economy better than anyone else - did not follow in the foreigners' footsteps and chose instead to stay in the domestic bond market."

Japanese hedge funds stayed in Japanese government bonds because they can't find domestic borrowers, forcing them to seek out the only lender in town. These hedge funds have already been disappointed by previous easing efforts, such as those between 2001 and 2006 that did very little to stop deflation.

There seems to be very little that easing can do to spark inflation. Japan's deflationary problems have come as a mixture of an aging working population that has bred a worker shortage, and a lack of borrowers in the private sector.

Money Morning Chief Investment Strategist Keith Fitz-Gerald said more QE and debt - which is what Abenomics will deliver - is not the answer.

"The country doesn't need more debt but it does need a kick in the butt," Fitz-Gerald said. "The falling yen will be good for export-based economy but there is very little domestic consumption to speak of. Wages are rising slower than the cost of living, which is compounding matters."

Japan will continue to pour more money into a policy that will fail to deliver. And that's where the profit opportunity arises...